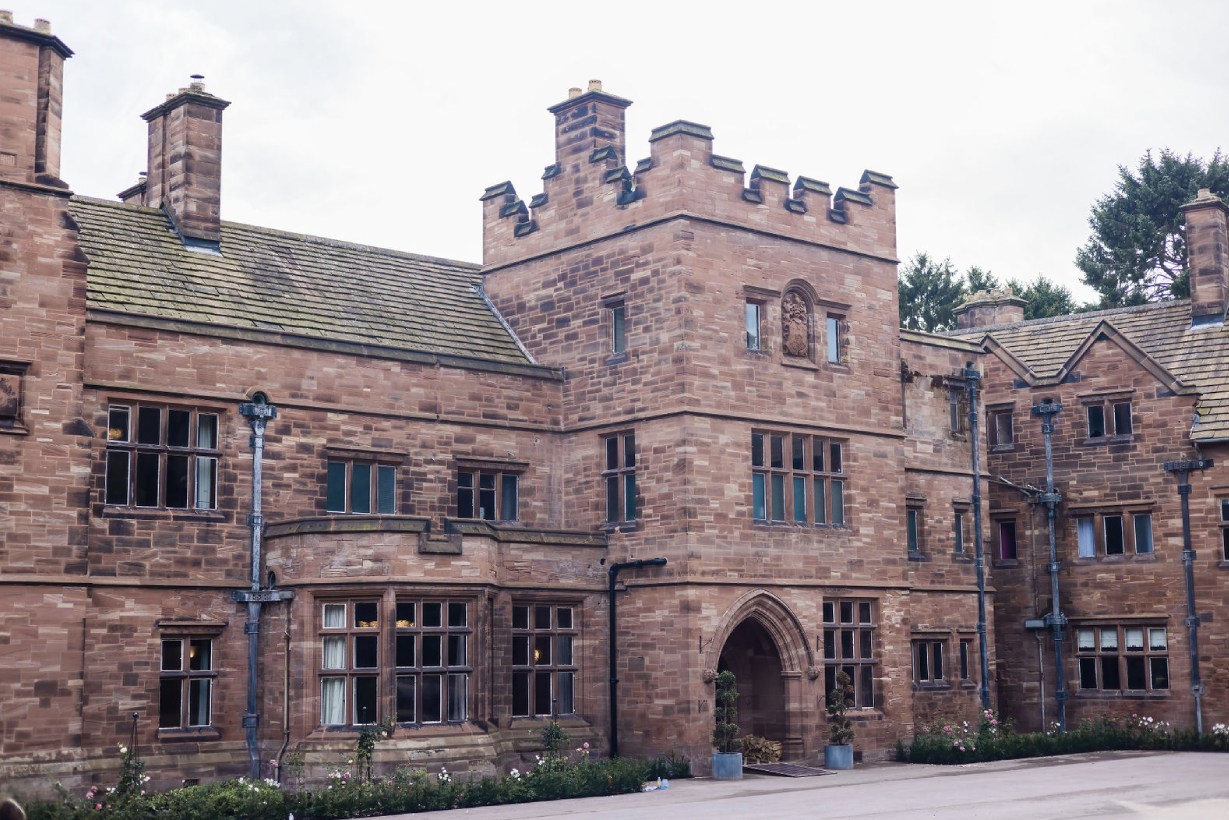 We talk to the owners of Standon Hall, Joanne and Andrey, about how they converted a former care home into a whimsical and vibrant wedding venue.

Joanne, a local florist, and Andrey, who owns a car business, turned their dreams of opening a wedding venue into reality when they took on the extensive refurbishment works at Standon Hall.

When the couple got married in 2018, they saw a gap in the market, finding that venues were either very old fashioned or completely modern and lacking in character. Andrey credits his wife for the inspiration, telling us that her flair for design gave them the confidence to go for it.

Towards the end of 2018, they found the Grade II listed mansion, steeped in Edwardian history, was up for sale. They rushed to raise the funds to prevent it going to auction.

The sale went through and they were told they would be in by Christmas. However, the keys were miles away in an auction house in London. It was New Year before they got the keys, which Joanne says in hindsight was a relief, as they were able to relax and enjoy the festivities before the refurbishment project began.

At the mercy of local councils and the pandemic, the couple endured a tense wait. They filed for a change of venue in early January. Despite proposing "a viable use for the building", which had been empty for some years, there was opposition from the local area and it took eleven months to get approval.

Then, thanks to Covid, their planning application went from a thirteen-week wait to another eleven months. The renovation began finally in March 2021 and finished in the following August, on the morning of their first wedding!

Commissioned in 1910 by Sir Thomas Anderton Salt, the hall was designed by influential Liverpool architect J. Francis Doyle. The owners say preserving the original panelling, fireplaces, flooring and stone mullion windows was a primary concern given the age and history of the building. A key part of their concept was to blend these features with modern touches, comforts and a bold colour scheme, packed with personality.

With all the plumbing and electrics in need of an overhaul, the renovations were substantial. They had to spend half a million pounds on asbestos removal alone. However this gave them scope to redesign key areas of the property. In creating the ceremony room, for instance, they were able to alter the pipework and perfectly position their radiators.

The ceremony room overlooking the gardens. Radiators: Rococo II in Little Greene Urbane Grey The couple went for Castrads Rococos throughout. The ornate floral motifs on this radiator tie in beautifully with botanical details featured in the decor.

We offer this high-output model in 10 different heights and three depths, making it possible to maintain continuity across an entire property, even one as sprawling as Standon Hall. To see inside another stately home renovation project read our case study on Underscar Manor in the Lake District.

The bathrooms illustrate how well modern fittings can work alongside period features. Many of Standon Hall's suites feature Vivien towel radiators and Rococos alongside luxurious stone baths from Lusso. See How to Heat Bathrooms for more inspiration.

With Joanne’s strong sense of design, she had a clear vision for the project and came to us knowing exactly what she wanted. As we provide a fully bespoke service and offer the complete range of Little Greene paints among our finishes, we were able to fulfil all of her wishes.

Each radiator was finished in an assortment of Little Greene shades. A British family-run company with a strong eco-friendly ethos, Little Greene specialise in historic paints and wallpapers which they produce in North Wales. Like Castrads, they were established in Manchester and continue to take inspiration from the long industrial heritage of the area.

The ceremony room and much of the ground floor has a muted colour palette to create an understated backdrop allowing their clients to individualise and adapt the space to their own theme.

In the bedrooms and suites they have kept it funky with brights in some rooms, more moody tones in others and a distinct botanical vibe throughout. The couple say they saw the bespoke process of a fully customisable radiator as a big opportunity.

Joanne’s background in floristry has been a huge influence on her interior design vision for the hall and when it came to landscaping the grounds, naturally her focus was on flowers and foliage. The hall now looks on to a formal garden filled with colour and texture that harmonises with the rolling Staffordshire countryside beyond.

With the ground floor and bedrooms completed and many successful weddings under their belt, Joanne and Andrey are looking forward to starting work on the top floor of the hall, in the final stage of the renovations.

Standon Hall is hosting a series of open house events in the coming months, so why not go and take a look for yourself. Details @standonhall.