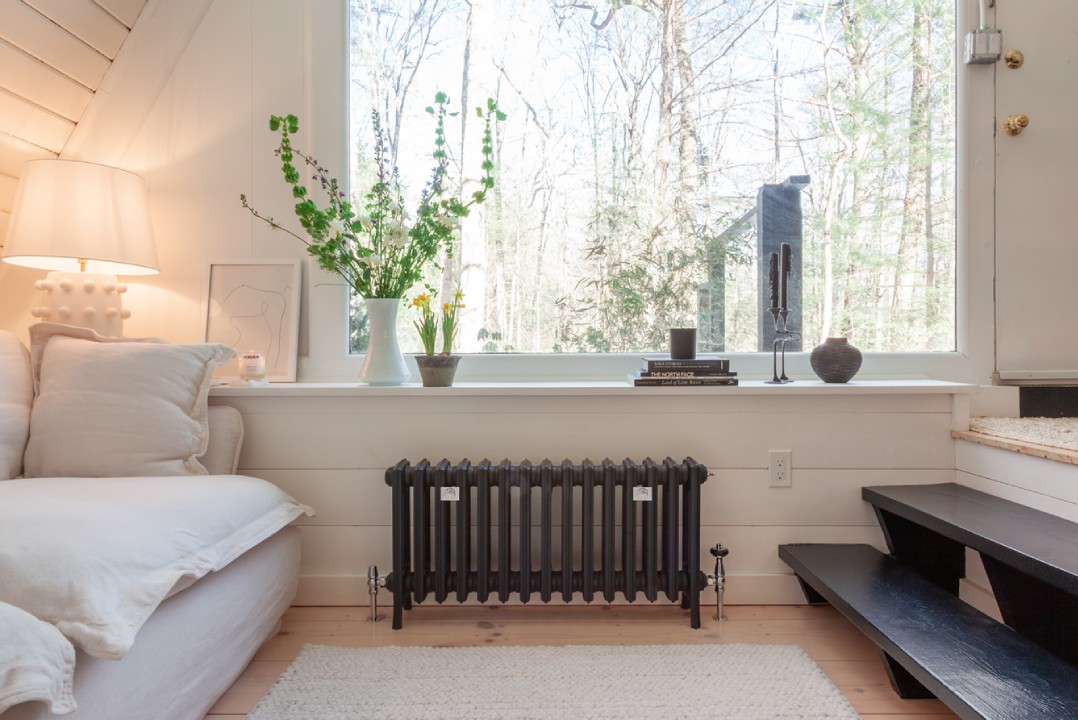 Home / Inspiration / How to Heat / The Triangle House

Amber and Stephen purchased the home in 2017. An unbelievably quick turnaround on their offer (the property went on the market Saturday evening and was theirs the following morning) was the first of many ‘pinch me’ moments.

Originally from the UK, the couple moved to New York in 2013 when Stephen had a work opportunity. They had planned to stay for 18 months, but 9 years and a pandemic later, they are living their work-from-home dreams full-time upstate.

Nestled deep in the woods of the Catskill Mountains, in the town of Kerhonkson, the house is truly magical. They are surrounded by three acres of private old-growth woods, giant oaks, sugar maples and giant flowering rhododendrons. Built on the paving of locally quarried bluestone, the semi-landscaped garden grows native bulbs, seeded flowers and ferns. A big red Japanese maple also grows here, which is as old as the house itself.

The estate is home to black bears, coyotes, foxes, wild turkeys, and tons of deer, and the family loves observing the wildlife from the comfort of their woodland pad.

"It provided us with a haven during the pandemic, allowed us to bring our daughter up in the countryside and ultimately create our first dream home."

Close enough to the city so as not to feel too detached, life in the Catskills allows them to bring their daughter to swim in Minnewaska lake in the summer and snowboard at Hunter mountain in the winter. They love to visit local joints, such as the Westwind Orchard, to dine in, and to grab a bottle from the Bluebird wine shop.

The exterior of the cabin has been a variety of shades in its time. To embrace its place in local nature, the cabin is coated in Studio Green by Farrow & Ball®, complemented by black accents.

Inside, they brightened up the cabin by painting the original shiplap walls All White by Farrow & Ball®. It’s so gorgeous it will make you want to do the same! Many of the interior elements, such as the deVOL Kitchens' lights, are created by English brands. Amber says “We didn't intentionally set out for it to be that way, but I love how it has become an English-inspired cabin set amongst the woods in the Catskills.”

They kept the interior minimal by adding monochrome furniture and accessories, and the neutral tones inside the house compliment the views. With thick green trees reflecting through the windows in summer and deep snow in the winter, the space is bright yet cozy. As the color palette is neutral, textures are used to add dimension. Amber is a big fan of the scent of VERDEN products which carries through the space.

Throughout their renovation, they knew they wanted to invest in aesthetic and functional heating. When they bought the cabin, it had electric baseboard heaters both upstairs and downstairs; a top priority to replace. Not only old, but they also took up too much room. The already precious space in the cabin is completely visible, and the long cold winters mean having fewer radiators is not an option.

Working with Castrads, they ordered matching Grace radiators, which Amber calls "one of the greatest additions to the cabin”. Designed to meet their heat needs and to blend seamlessly into their home, we painted them in Farrow & Ball®  Black/Blue (which also matches their stairs!).

It doesn’t get more upstate than this, but the couple was forced to replace the original wood-burning stove after squirrels broke in, destroying the cabin. They knew they had to replace it, given it was from the 70s, but the incident made squirrel defense move to the top of the list. They opted for a wood-burning stove replacement by Stuv and encased it with custom cladding. The beautiful feature protects their little one and two dogs Yorkshire Terrier, Wolfie, and Sharpei, Bambi.

To maximize the front of the cabin, they plan to add more glass, including a door. They will be guided by the amazing team at Studio MM Architects. With these additions, their dream is to create a greenhouse-style home and bring in as much nature and natural light as possible. Eventually, Amber and Stephen hope to re-do their front decking, to truly blur the lines between their home and where nature begins.

For the couple, The Catskills is not just a home. It's also the birthplace of fly fishing in America, around which their company Nation FC is centred. They create premium fishing tackle and apparel, with performance, comfort, and design as their main focus. They launch in June, with a range of fly rods and fly fishing accessories.

The family does not yet know of the plans for the future, as the cabin is too small in the long term. They plan to continue to shape their dream home, with the intent of eventually sharing the space by renting it out, and I think the team here at Castrads will be first in line.