In one-pipe steam installations, steam flows from the boiler to the radiators, where it displaces the cold air by pushing it out through a vent on the radiator. The air vent closes automatically when the radiator is full of steam. The heat energy in the steam is then transferred to the room, as this occurs the steam cools and condenses into water which pools at the bottom of the radiator. This condensate then flows back again through the same single pipe.

Due to the steam and water flowing in opposite directions through the same pipe, the diameter of this pipe is typically more than 1". So one-pipe radiators are easy to identify from the single, fairly large pipe connected to them, always at the bottom, and an air vent attached to the opposite side, typically halfway up the height of the radiator (see below). 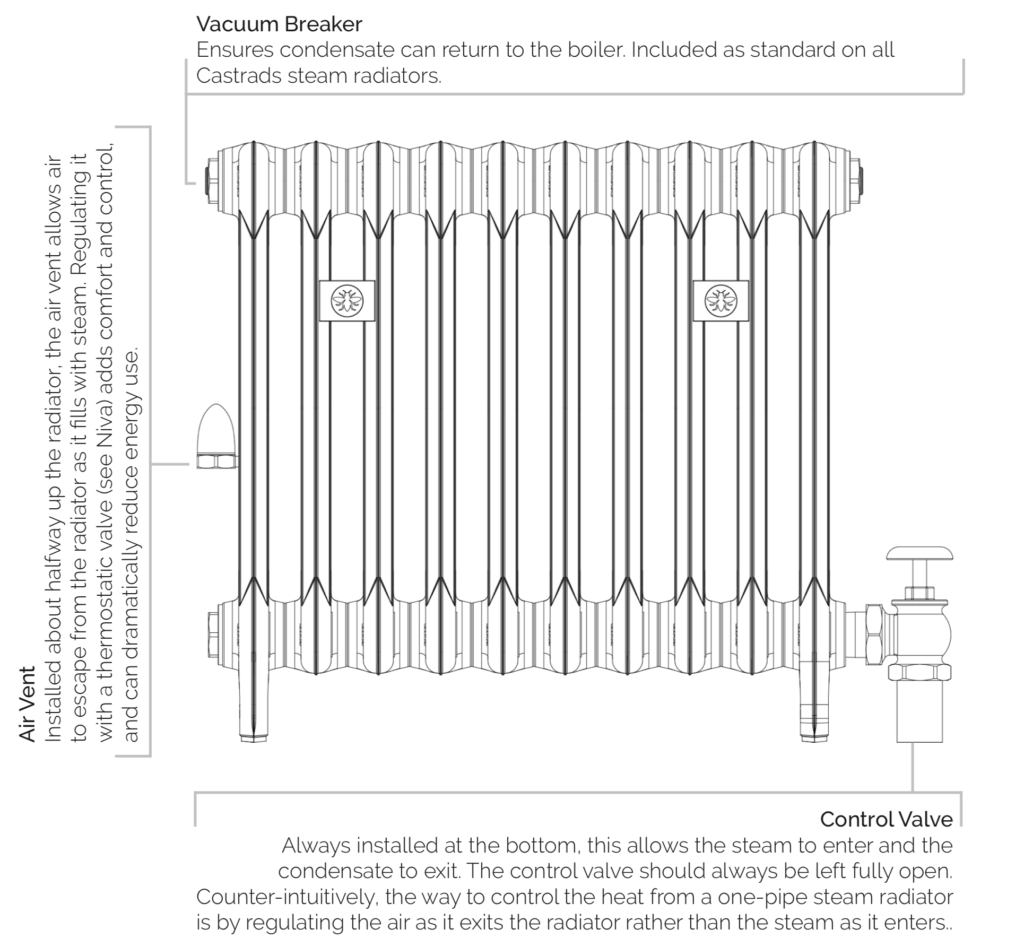 The inlet, or control, valve must have a large internal bore: minimum of 1" for radiators of 5000 BTUs or fewer; at least 1-¼" above that. On a one-pipe steam radiator it must be fully open or fully closed. Throttling the valve (leaving it halfway open) can lead to very noisy steam hammer. The heat from a single-pipe steam radiator is controlled by restricting the air that can exit.

A one-pipe steam radiator valve should be fully open or fully closed, never in between.

Steam vents allow air to escape from the radiator but shut automatically when the radiator is full of steam. An air vent uses two mechanisms. The first is a bi-metallic strip made from two different metals, as the steam heats the valve it causes one metal to bend more closing the valve and is tuned to spring closed just below boiling point. The second mechanism is an actuator filled with water and alcohol which is set to boil just below the temperature of the steam. When the liquid inside the actuator boils, it expands and thereby closes the vent, preventing steam from leaving the radiator.

Adding a thermostatic valve between the radiator and air vent allows for temperature control by limiting the air that can exit and therefore the steam that can enter. Thermostatically-controlled steam radiators require a vacuum breaker to ensure the condensate can always return to the boiler. Castrads radiators for one pipe steam come with one supplied as standard.

Which radiators to use with one-pipe steam?

Cast iron really is the time-proven material of choice for steam heating. Steam puts the system a lot of stress: large temperature swings that cause the metal to expand and contract with every heating cycle; acid or alkaline conditions dependent on the chemical makeup of the water; and, if the system isn't well designed or maintained, intense shocks from steam hammer. Cast iron also forms a passive rust coating protecting the bulk of the material from further oxidation. All of this goes against using thin-walled steel radiators with welded joins, they just don't last.

We only offer cast-iron radiators for steam systems, never steel. When it comes to valve connections on steam, we only recommend threaded, mechanical joins with steel or brass pipe. While compression fittings are perfect for hydronic systems, we prefer the time-tested, heavy-duty security of a threaded join.

We recommend a 1" valve for radiators up to 5000 BTUs or fewer and 1-¼" valves above that. Read also: How it works: Hydronic heating.