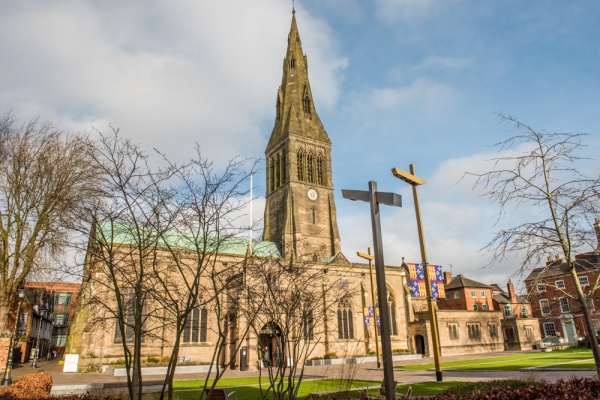 In 2015, more than 500 years after his death, King Richard III was reburied in Leicester Cathedral after his grave was discovered beneath a nearby car park. His tomb now draws in over 100,000 visitors every year.

This ten-fold increase in footfall has prompted a complete restoration of the Grade II* listed building. Formerly St Martin’s Church, the site has been a place of worship for over 900 years, becoming a Cathedral relatively recently in 1927.

The renovation project, called Leicester Cathedral Revealed has a budget of £12.7 million raised through donations, funding from local organisations and grant making bodies such as the National Lottery Heritage Fund.

As well as a newly built Heritage Learning Centre and Gardens, a full restoration of the spectacular interior will be carried out, including 10 original radiators which are being refurbished by Castrads.

Amongst them are National Four Columns, by The American Radiator Company. Cathedrals are notoriously difficult places to keep warm but these large, high output radiators are ideal for the job.

The American Radiator Company logo on the end caps tells us that these models were cast in Buffalo, New York some time before 1906. After this time, ARCo expanded to England and began casting radiators in Hull. These had end caps marked with their British trade name, NRC (The National Radiator Company).

The American Radiator Company was a global enterprise by this time, with yearly sales amounting to billions of dollars in today’s money. By 1915 their advertising boasted that their radiators heated some of the most 'cherished and important' buildings in the world - the US Capitol, the Vatican, Westminster Abbey, The British Museum, the Louvre, Vienna University, the Women’s Academy in Seoul, the Palace Hotel in Cairo and Melbourne Hospital to name a few. Read more about the ARCo empire in our timeline of Heating History.

The other models being refurbished by Castrads are plain-surfaced Rococo Window radiators, another very high output, six column model. Typical of its era, a 1905 booklet published by ARCo markets the Rococo Window Radiator to the women who worked in the home and their high standards of hygiene:

“The housewife…appreciates how easy such radiating surfaces are dusted, there being no projections on which dust may lodge. In a bathroom, nursery, kitchen or similar room where thorough cleanliness is essential, the radiators may be washed or scrubbed perfectly clean.”

The customer requested that we use a specific cellulose paint to refinish the radiators. As this is not a product we habitually use, we are carrying out a trial so the customer can approve the colour and to ensure the quality of the finish meets expectations. Watch this space for pictures of the newly refurbished radiators once the trial is complete.

Read more about our refurbishment service