Home / Inspiration / How to Heat / Brownstone

How to heat: A New York Brownstone

The iconic New York brownstone, and by extension, townhouses across the city that emulate the style, were early adopters of the central heating system.

According to Brownstoner Magazine, central heating started to appear in the wealthiest homes as early as 1880, with the vast majority of brownstones having steam systems installed between 1910 and 1930. Meanwhile in the UK, a centrally heated home was still something of a rarity well into the 1970s.

Sister to the British Victorian Terrace, the American Brownstone shares many of the same quirks and attributes. You can read about heating in combination with fireplaces, bay windows and modern, open-plan interiors in our guide to heating a Victorian terrace.

The following case studies highlight some of the common issues we encounter with Brownstones. For additional advice on steam systems, take a look at our How to heat with steam guide. 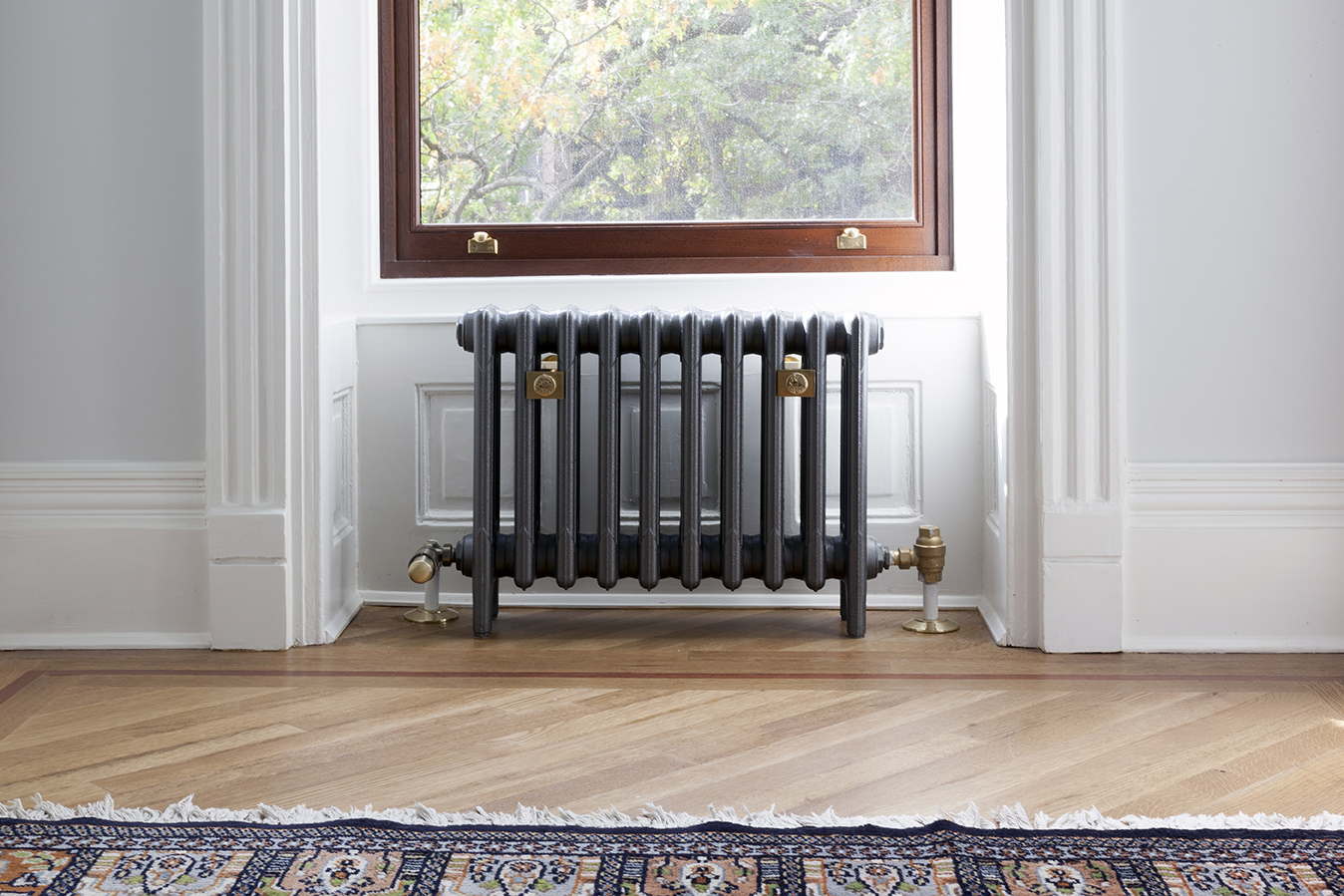 This duplex apartment in Park Slope was undergoing a complete gut renovation. Our client was seeking to modernise both the look and the operation of their historic home. Their key goals in terms of heating were to regulate the temperature, achieve a quieter system and a uniform look to suit their contemporary Elizabeth Roberts inspired interior.

Fed up with a noisy, temperamental 2-pipe steam system, they assumed they were going to need a new boiler. However, with the other occupant of the building unwilling to contribute financially, it was going to be a very costly addition to the renovation works.

When they called in master plumber Gennady Tsakh, from Absolute Mechanical, he was able to fully overhaul their system, getting it running smoothly and quietly without the need for a new boiler. With the floors being taken up, Gennady was able to address the pitch on pipes throughout the apartment. When pipes are not pitched correctly, condensate does not drain out of the pipes and can pool, leading to steam hammer - that clanging sound you hear when water mixes with steam. He renewed all master vents, which release air from the pipes and allow the system to fill with steam, making for an even distributing of heat.

With a full gut reno, you have more freedom with radiator positioning, and pipework can be perfectly positioned for a neat, sleek look.

Additionally, Absolute Mechanical cleaned out the system, tuned the boiler, adjusted the operating pressure and advised fitting every radiator with vacuum breakers and TRVs to further reduce the chances of steam hammer.

The apartment had a mixed bag of unsightly, mismatched cast iron radiators. The client wanted a set of fresh radiators to bring everything in line with their interior aesthetic.

Following a site visit, we helped them to design a streamlined look for their heating along with elegantly styled thermostatic controls. Because they were adding insulation as part of the renovations, we were able to significantly downsize their radiators.

We moved some radiators below the windows, custom sizing them to fit perfectly within the 'frame' formed by the alcoves, which are typical of this building style. 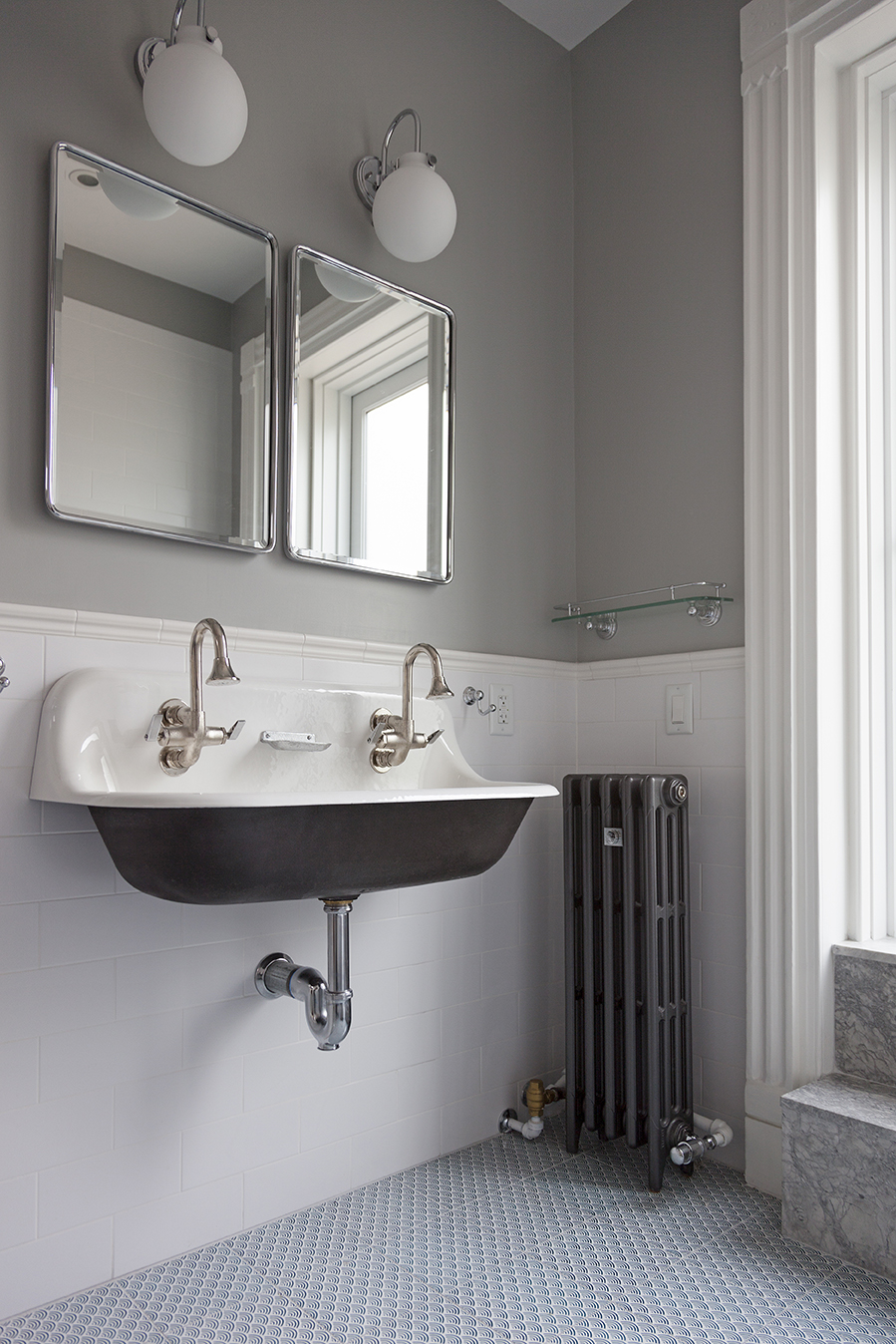 Using just one model throughout, this apartment illustrates the versatility of our ranges. Mercury offers an understated complement to the more traditionally styled bedrooms and living areas, with wood floors and inlaid marquetry, classic moulding on the walls and mid-century furnishings. While in the bathroom, Mercury becomes more of a feature, helping to construct a monocrome, comtemporary feel, accented with marble, tile and industrial intonations. 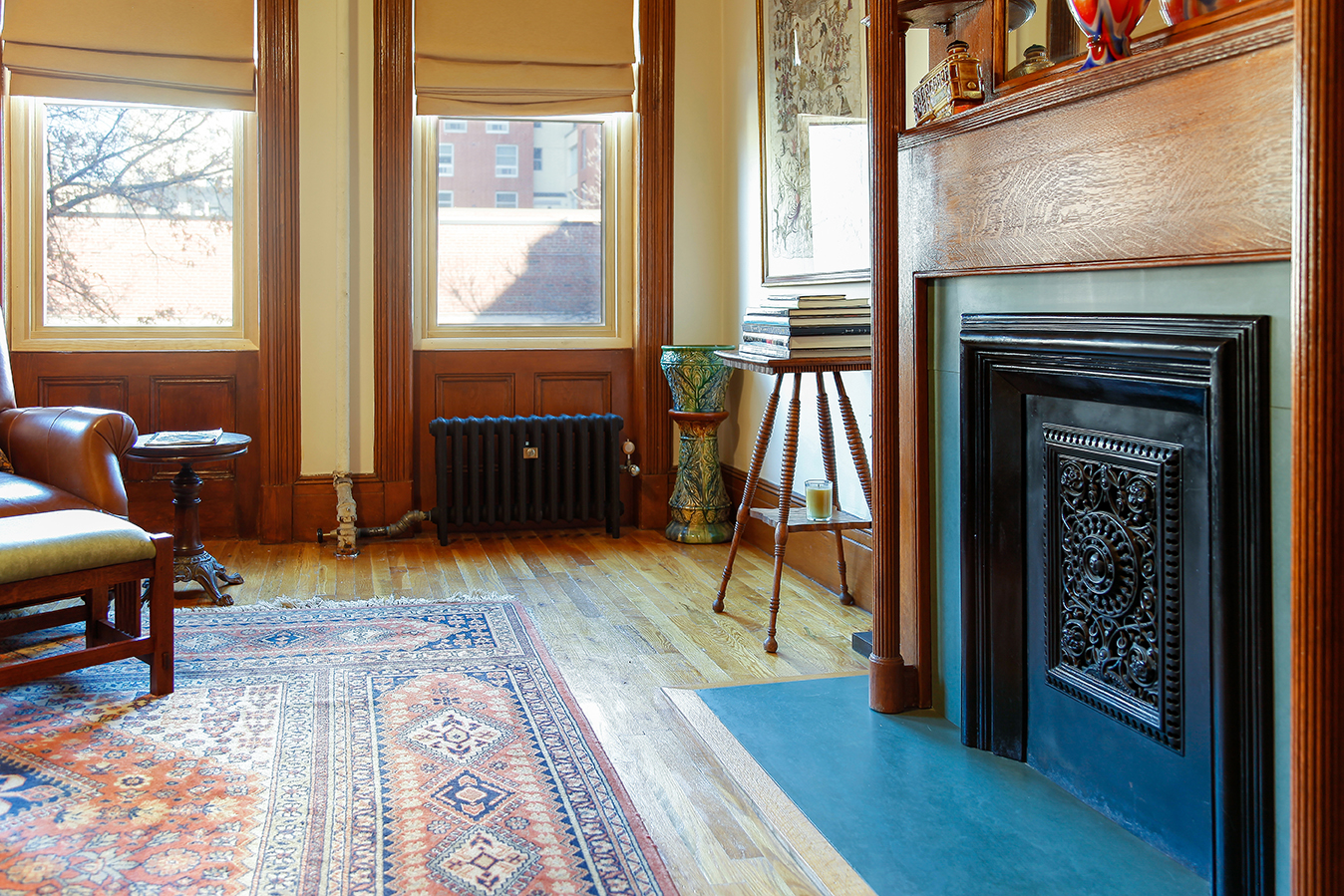 The owners of this Harlem townhouse had been struggling for years to regulate their noisy and unbalanced system. Their ugly radiators were a thorn in the side of their otherwise exquisite interiors.

The major issue was that the radiators at the very top of the house were not heating up adequately. After trying out new air vents and endlessly adjusting their valves they finally contacted John Cataneo of 72F Mechanical who carried out a survey on the property's heating system. Cataneo's advice was to upgrade the venting on the pipework to improve the distribution of steam throughout the system, tune the boiler and add TRVs.

With no desire to renovate, the client had greater restrictions on radiator placement but were nonetheless able to refresh their setup, reposition certain radiators and reinstate missing units.

Where possible in relation to the riser, we moved radiators under the windows, freeing up space in the room and creating a neat, classic pairing with the sash window frames.

Mercury models in matt black make a great match for this characterful take on the traditional townhouse interior. The upgraded radiators blend beautifully with the period features which have been foregrounded alongside antique furnishings and bold artwork. 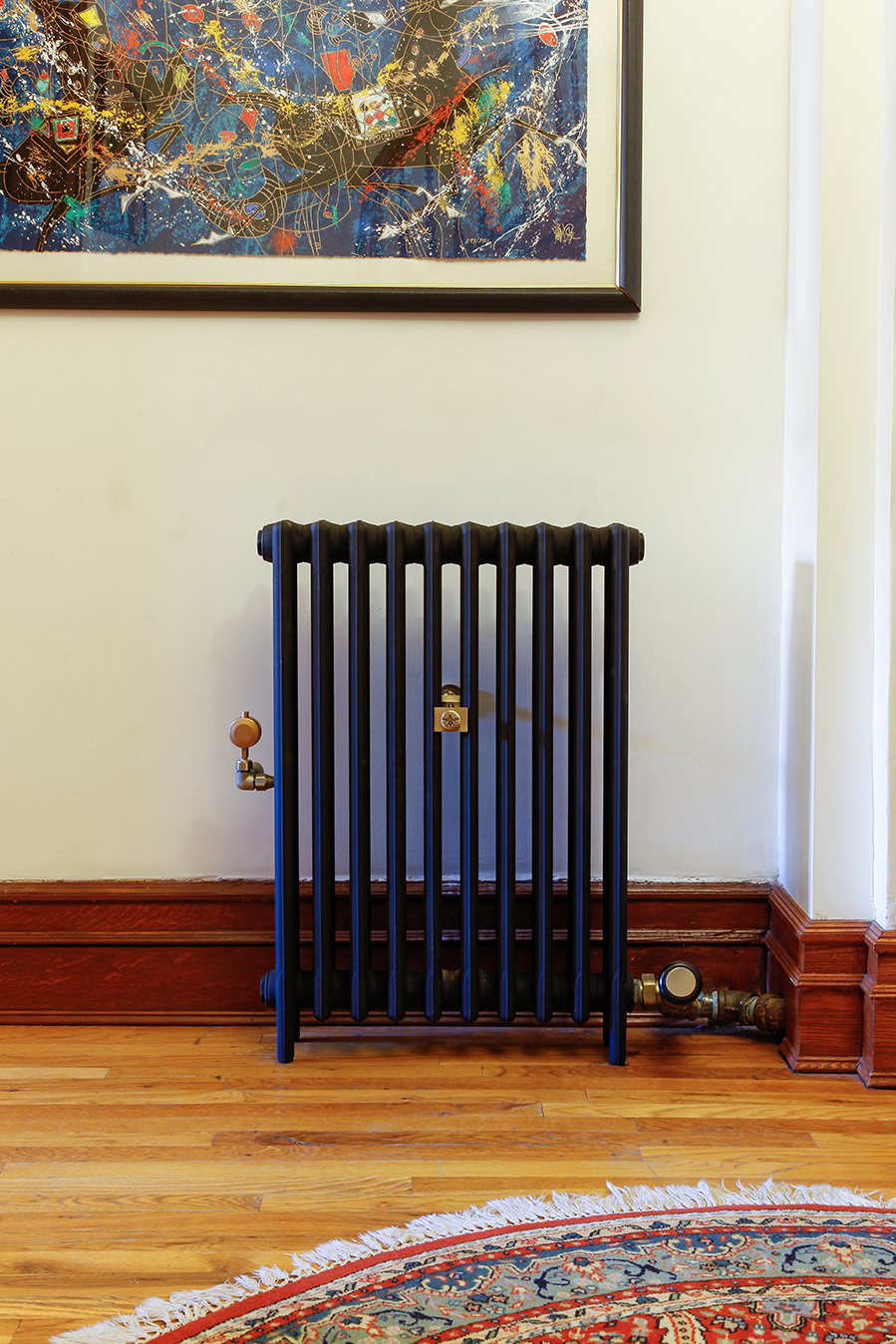 With very little disruption, we worked closely with the client's contractors Gateway Plumbing and Heating to install all of the radiators in just one day and also remove the old ones. 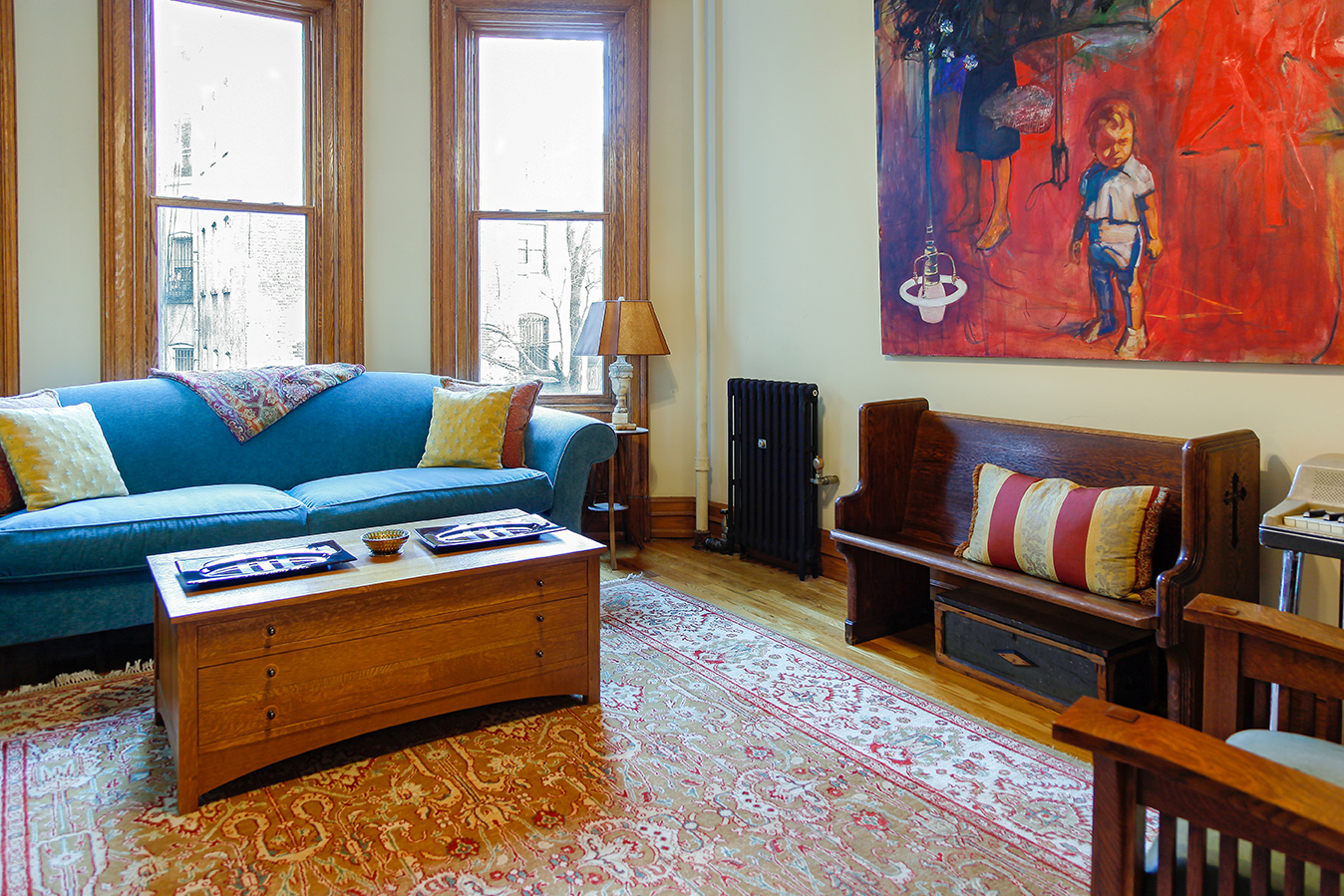 Because we custom make our radiators to our clients exact requirements, many were simple, straight swaps with the existing units. We also added new vents and TRVs to provide the clients with automatic temperature controls.