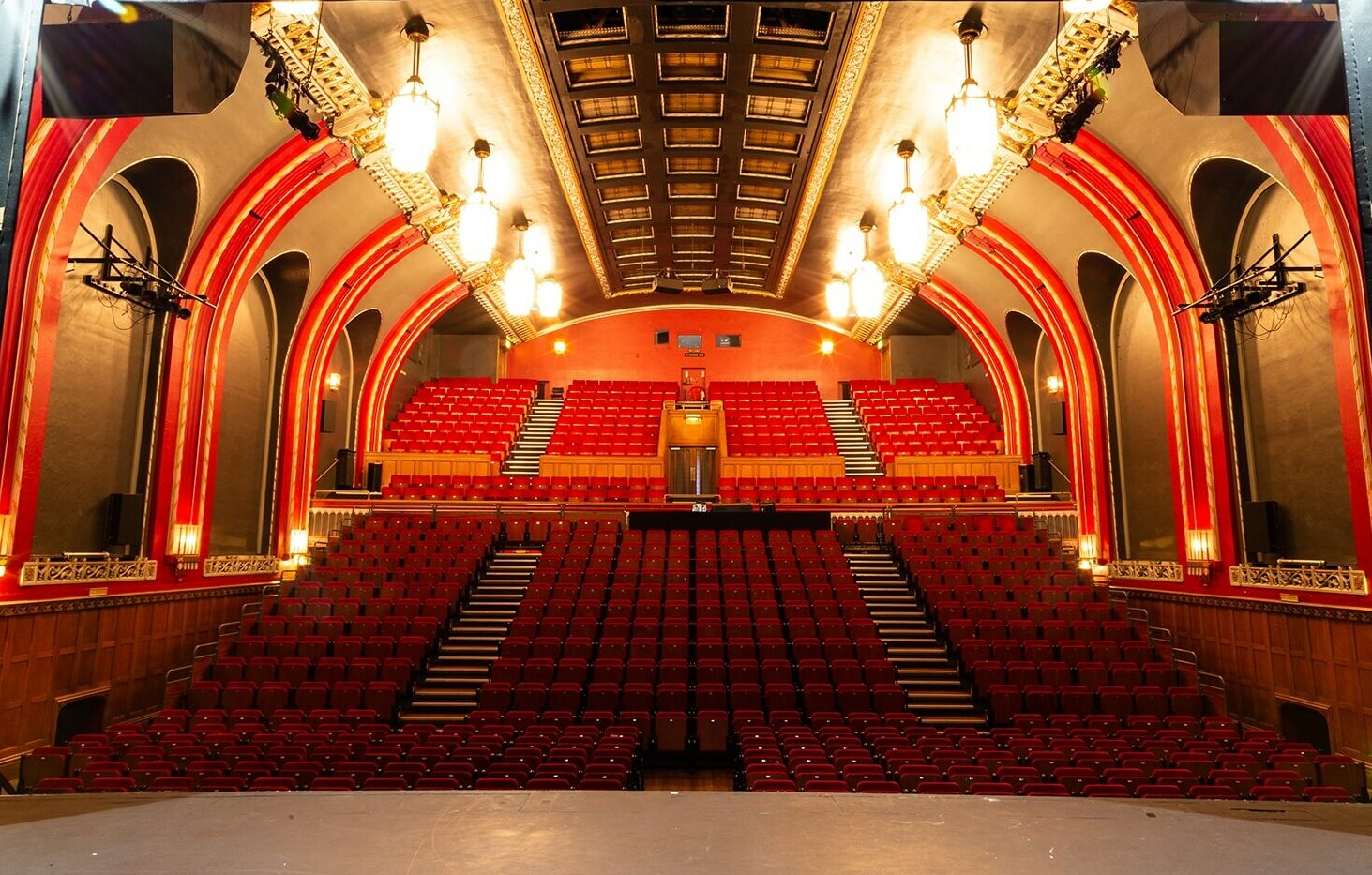 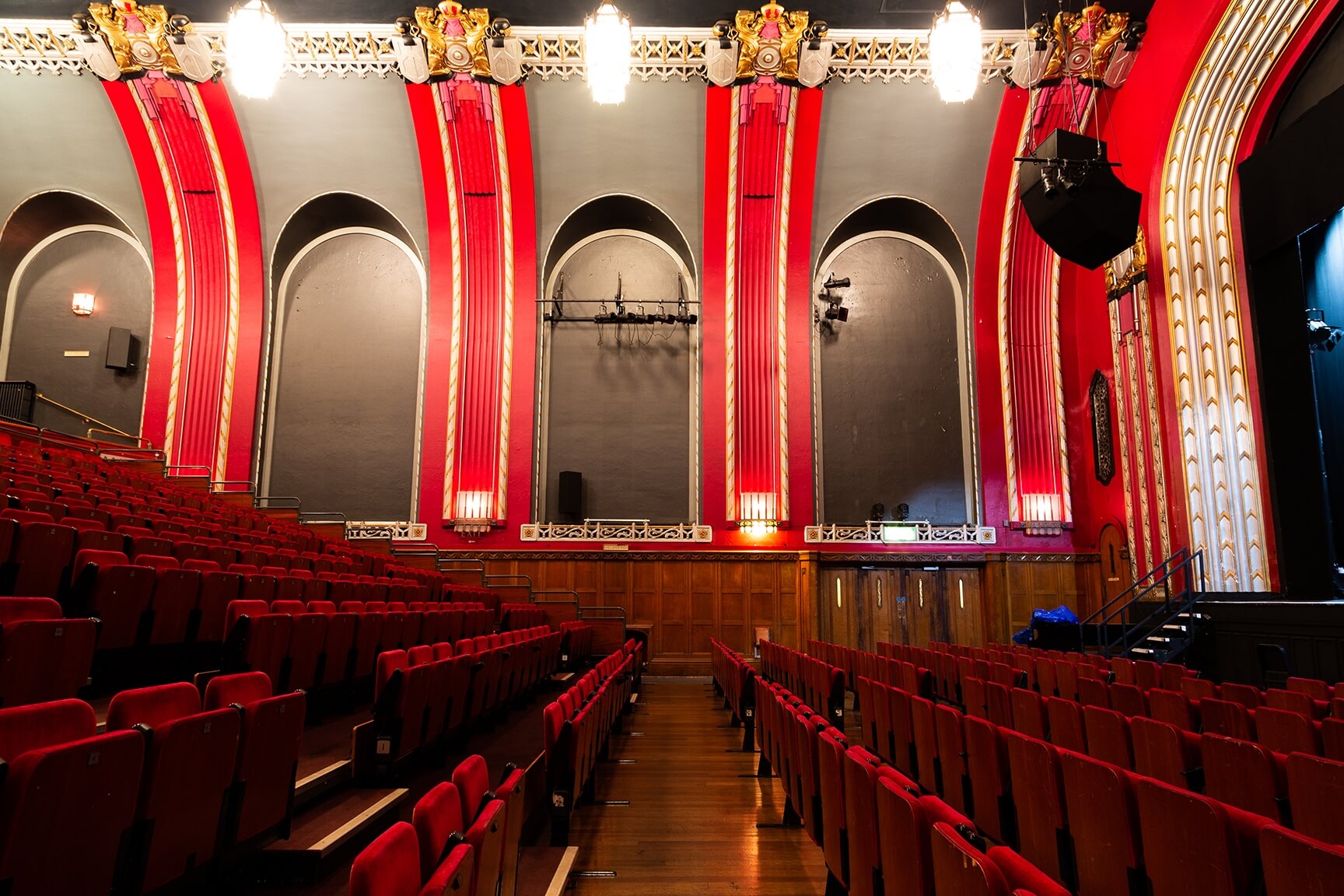 The Mayor of London’s Borough of Culture for 2022 is Lewisham and as part of the celebrations The Broadway Theatre in Catford, which turned 90 this year, is undergoing a huge £7million renovation. Council owned and community run since its very beginning, the aim of the revamp is to improve accessibility and open the building up to more people, as well as to protect a whole host of original architectural features.

Built in 1932 by architects Bradshaw Gass & Hope, the theatre is a Grade II* listed art deco building. It features some Gothic influences intended to echo the Gothic Revival Town Hall that it was originally attached to but has since been demolished.

The theatre was opened by the Queen’s father, while he was still the Duke of York. In his speech he congratulated the council on its treatment of their citizens and public funded services.

Through the 1930s and early 40s the venue was hired out to local organisations and operatic societies who hosted weekly dances, concerts and performances. During the war years, lunchtime concerts continued but the site was also used as a ration book distribution centre with the lower stores converted into an emergency air raid shelter and telephone exchange.

In the 1950s it became well-known for ballroom dancing and pantomime. By the end of the 1970s audiences welcomed showbiz royalty such as Tommy Cooper, Frankie Vaughan, Max Bygraves, Morcombe and Wise, The Drifters, Gladys Knight and The Pips, The Four Tops, Frankie Valli and the Four Seasons.

Between 1983 and 1990 Wynton Marsalis, Dave Brubeck, Roberta Flack and Alison Moyet all took to the stage as part of the annual Lewisham Jazz Festival.

Having been used more recently in the making of Ed Sheeran’s video for Bad Habits and a trailer for RuPauls Drag Race, Fontaines DC were the final act to take to the stage before The Broadway closed for refurbishment.

Speaking to the Catford Chronicle, theatre Manager Carmel O’Connor said “It’s going to be fabulous. I can’t even tell you how excited I am. It’s such a privilege to be this close to the refurbishment, knowing what this iconic Grade II listed building needs. Lewisham Council has been incredible at funding the project and in listening to us and all the staff.” One of her personal highlights has been seeing Maya Angelou give a televised performance from the theatre.

Castrads has refurbished 49 radiators as part of the renovation works. In 2019 Lewisham was one of the first local authorities in London to declare a ‘climate emergency’, with plan to become carbon neutral by 2030. Refurbished radiators have a carbon footprint 95% lower than that of a new one. In a project of this size, the choice to renovate existing radiators is drastically better for the environment.

Most are British-made original radiators from the National Radiator Company which would have been cast at their foundry in Hull in the 1930s. We believe the contractors who installed the theatre’s heating system were Rosser and Russell, a firm with a rich history that have also acted as heating contractors for several famous landmarks, St Pauls Cathedral, Eton College, Charing Cross Hospital, Madame Tussauds, BBC Television Centre to name a few.

The rest of the radiators to come to us from The Broadway were later additions to the building, produced by Demir Dokum and cast in Inegol, Turkey in the 1990s.

The National Radiator Company models have cast iron joining nipples which can be fragile and crack if disassembled. They still perform as well today as when they were made 100 years ago, so we simply refinished these as full units. The Demir Dokum radiators have steel joining nipples meaning we are able to take them apart and improve on the original gaskets by replacing them with new Kevlar ones. All radiators were shot blasted and finished in ritzy Ral 1036 Pearl Gold, returning them to their former glamour and getting them show ready for the next 90 years.