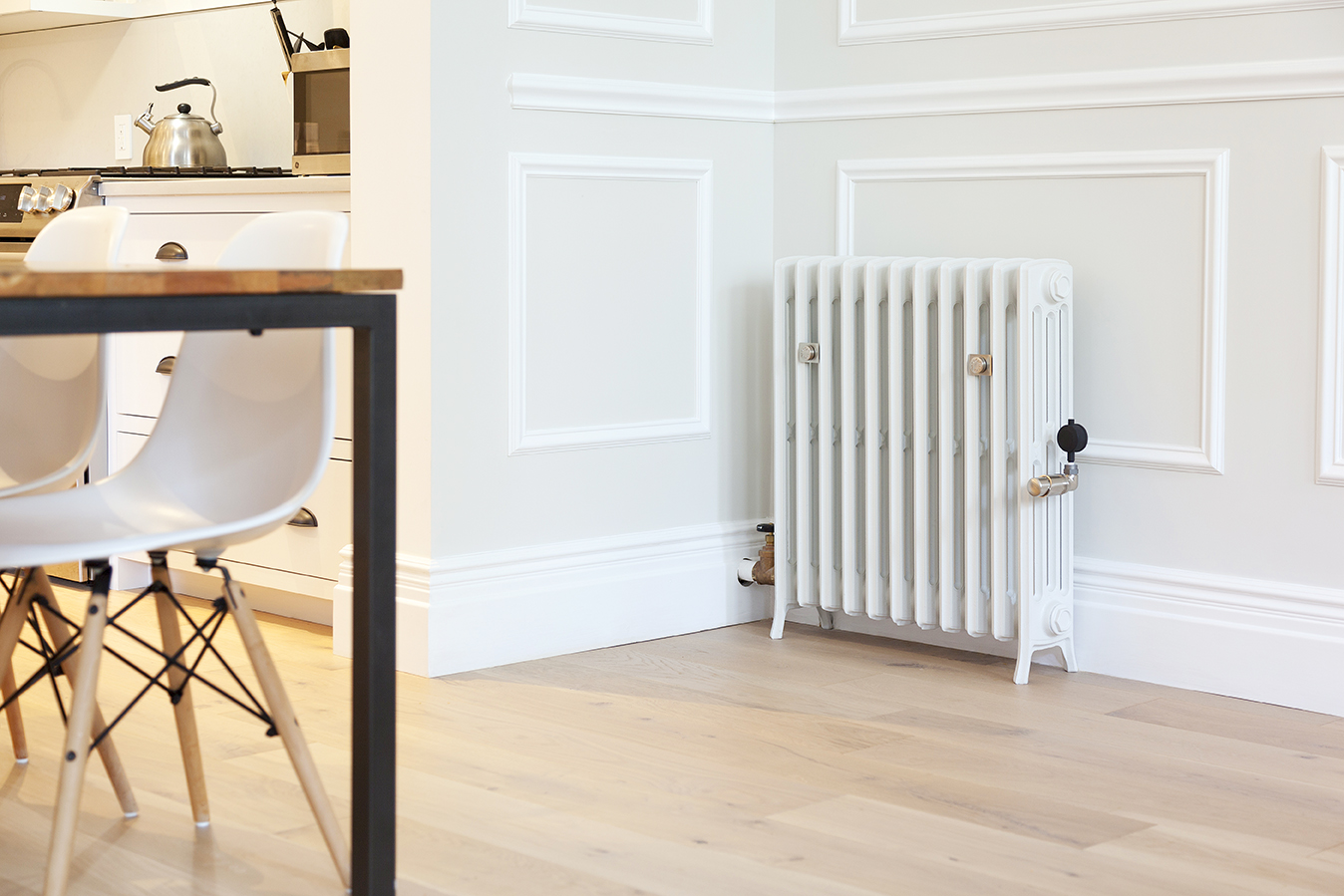 Home / Inspiration / How to Heat / How to heat with steam 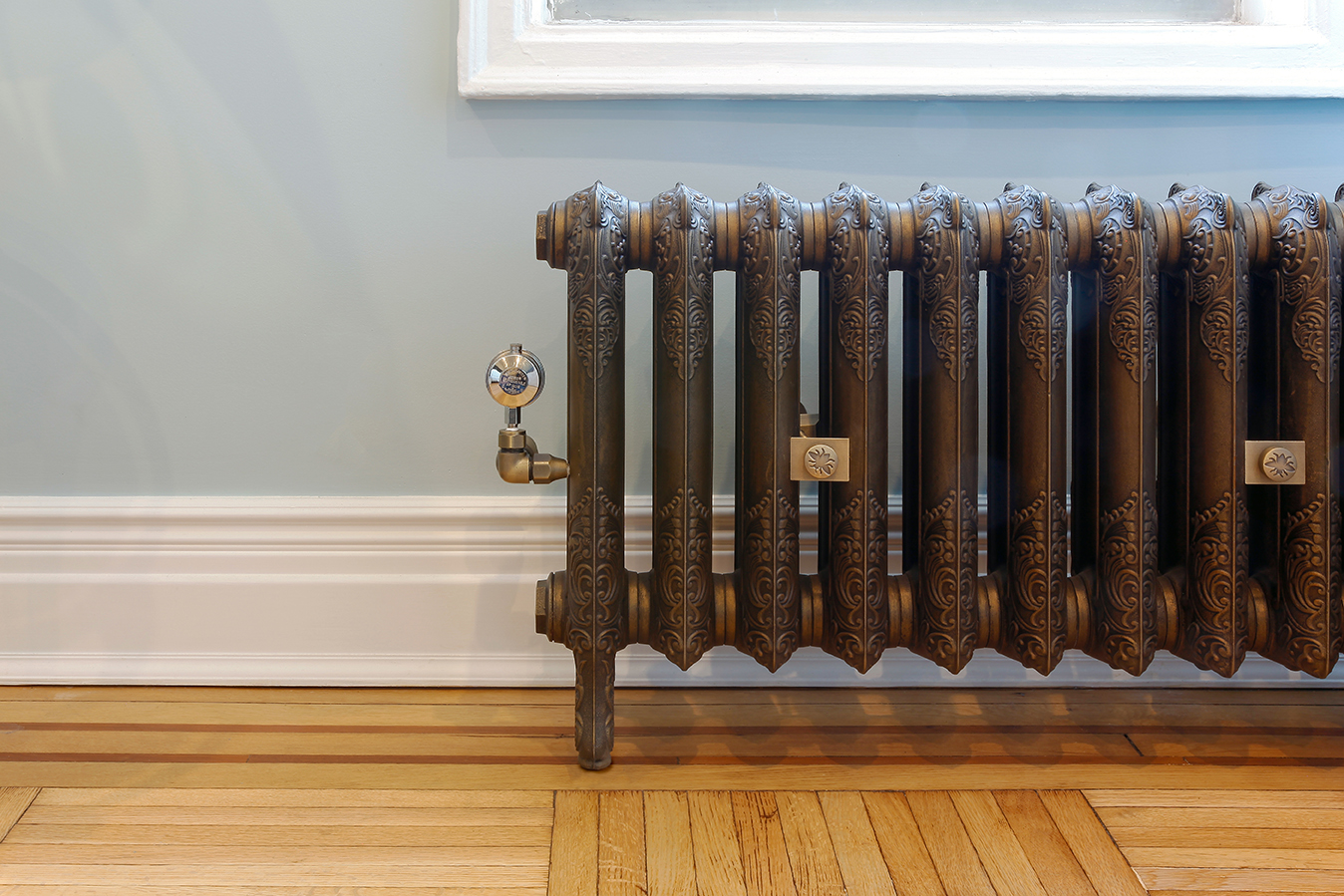 Steam heat is synonymous with New York City. It is used to heat thousands of residential buildings and also institutions such as the Metropolitan Museum of Art, the UN and the Rockefeller Center. St Peter's Catholic Church in lower Manhattan has been steam heated since 1882 and there are even hospitals and restaurants that tap into Con Edison's colossal district steam system for heat as well as sterilisation and cleaning.

Over a century ago, NYC's building boom coincided with the advent of steam heating, meaning that the vast majority of apartments in the city were originally built with cast-iron radiators. Many are still in operation today and as significant historical features of these prewar buildings, we see them as part of the fabric of the city worth preserving or reinstating.

On a steam system, it has to be cast-iron. Read our guide to how steam heating works to find out why. 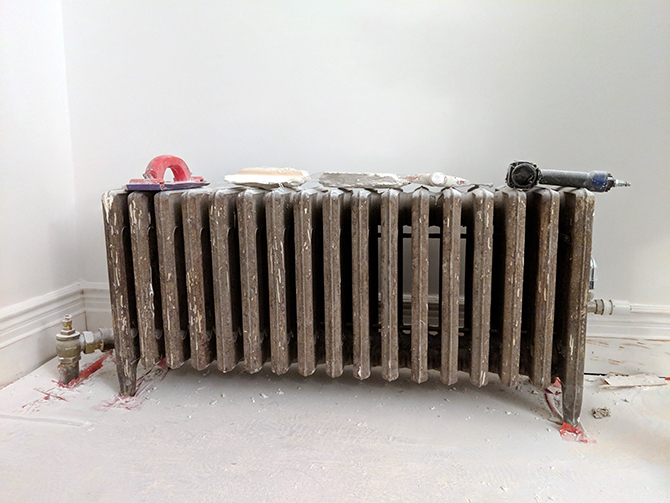 Having been around so long, it is common to see originals suffering from neglect, left to rust, caked in paint or hidden under radiator covers and forgotten. They often clang and hiss due to a poorly maintained system. All this has given New York City's cast-iron radiators a bad reputation. 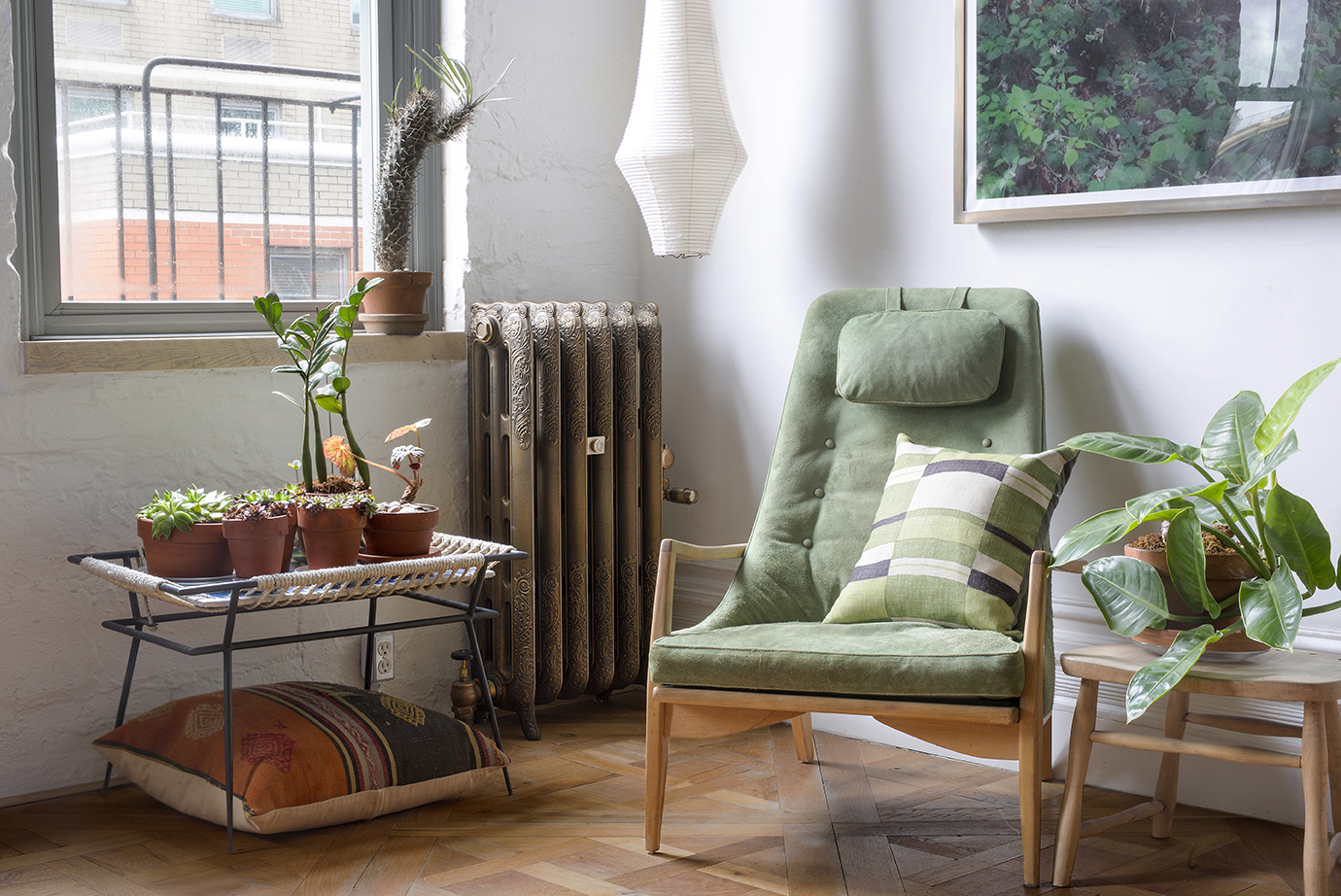 We see them as worthy traditional features that bring structure and period charm to an interior and they deserve to be showcased. Choose from our range of classic styles, custom-sized and finished in our signature bare metal finishes or any Farrow & Ball or Benjamin Moore colours. We also refurbish originals.

New Yorkers are all too familiar with the problem of sweltering in their homes while the snow piles up outside.

During the devastating Spanish flu pandemic, when domestic steam heating systems were becoming commonplace in North America, the Board of Health insisted that windows should be open at all times, even in the depths of winter, believing that fresh air helped to stop the spread of disease. As a result, larger boilers and radiators were used to counteract the cold. Now, of course, times have changed but with many original radiators still in situ and an imperative to reduce building energy usage, overheated homes have become a hot topic.

Don't be tempted to remove traditional radiators altogether. We see lots of cases where column radiators have at some point been replaced with lower output cast iron baseboard or welded steel radiators and the current occupants are too cold.

You can very easily downsize your current radiators without making dramatic changes to your existing pipework. And for automatic temperature control with absolutely zero disruption, you can simply swap out your old, on/off valves for TRVs. 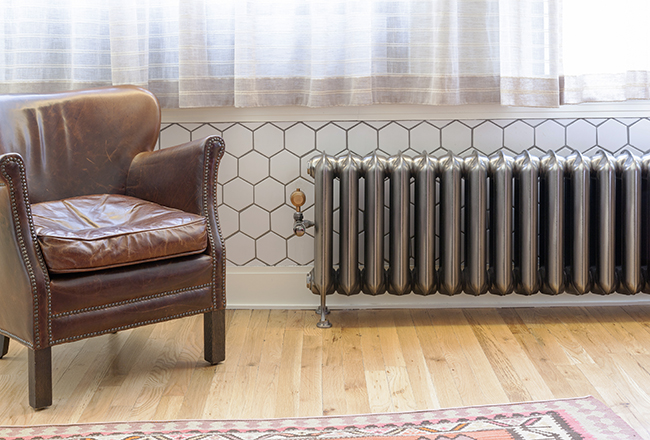 Beautifully designed and available in an array of metallic finishes, our TRVs are a smart, simple solution. They give you a gentle, even heat while also saving energy. Read How to heat efficiently.

The basis of a steam heating system is a boiler located in the basement with vertical pipes, called risers, channeling steam all the way up to the top of the building. Pipes feeding off the risers connect to radiators in each room, so radiators are generally located close to a riser.

Pitch on pipes is crucial to the proper functioning of a steam system. When moving a radiator further away from the riser, the feed must be pitched (1" in 10'). The further the radiator is from the riser, the higher the inlet valve must be to maintain this ideal pitch. If pipes are not pitched correctly water can pool and lead to clanking pipes.

Similarly, running longer pipes between the riser and the radiator, without adequate insulation, increases the possibility of steam condensing as it travels to the radiator, introducing water into the system and causing noise. 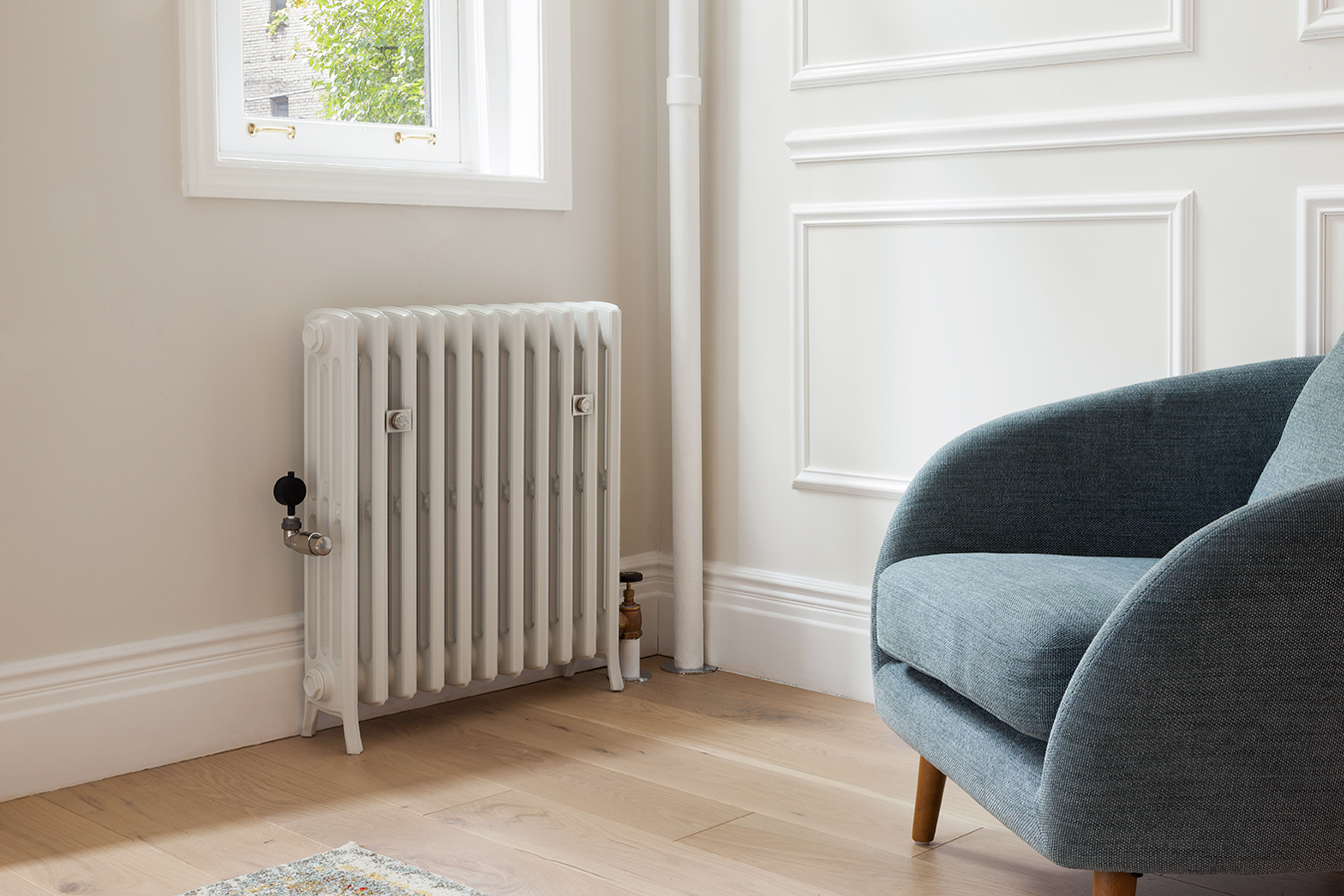 So steam pipework is difficult, and therefore expensive to move. When refurbishing, you can save a lot of time and money by keeping the radiators where they are.

Having said that, one neat switch that is often fairly easy to make is to move a radiator from a wall to under a window. If there is a riser close to the window, the radiator can simply be connected to the same riser but on the opposite side. This not only looks great but is also a practical use of otherwise dead space.