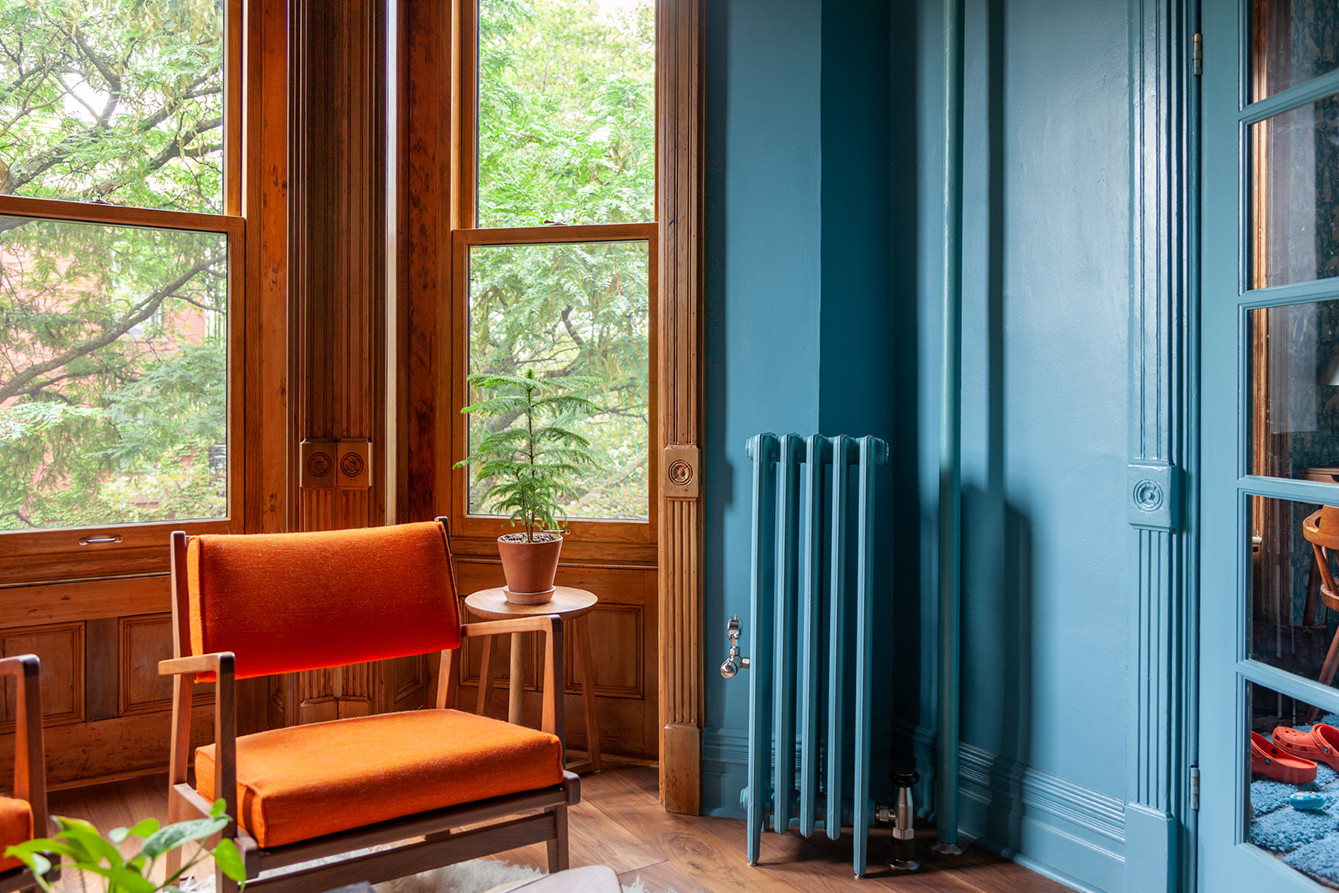 Spanning the western edge of Prospect Park, or ‘Brooklyn’s backyard’, Park Slope is a community-focused neighbourhood with a creative, socially-conscious, small-town vibe.

This 1920 Neo-Grec Brownstone building is just a block from Fifth Avenue, Park Slope’s main drag. A far cry from the dazzling department stores of its Manhattan namesake, this shopping strip fosters independent businesses and a laid-back restaurant scene, celebrating its niche as ‘The Other Fifth Avenue’.

When our customers bought their third-floor apartment it still had period elements such as original wood mouldings and a decorative tin ceiling, so they were keen to keep as much of this characterful interior as possible. They told us: “The approximately 100-year-old unit retained hints of its old Brooklyn charm, but some features needed to be freshened up.”

As part of their renovation project they laid new wide-plank floors and fitted custom vintage-style pocket shutters to replace the ones that had been removed by previous owners.

The original cast iron radiators installed on their one-pipe steam system were very oversized and threw out far too much heat for their needs. This is an issue we see very often across New York City where apartment buildings tend to have a central, shared boiler in the basement and residents have little or no control over the heating in their individual homes. Moreover, some of their radiators were awkwardly positioned and taking up space unnecessarily.

Following a site visit from one of our team, our customers opted to replace their originals with Castrads Mercury column radiators. They told us: “We appreciated the look of the old radiators, but the placement and size of the originals were not ideal.”

Corto by The American Radiator Company

The original radiators were Cortos, cast in Buffalo, New York, by The American Radiator Company. Introduced around 1922, the Corto was one of the first column radiators in the US, taking over in popularity from the ornate and school style radiators of the early 20th century. It was named after French engineer Louis Courtot, who patented earlier designs for thinner, lighter column radiators.

The model was hugely popular, arriving at a time when interiors were becoming less fussy compared with the Victorian taste for high ornamentation. The American Radiator Company played up the French connection in its marketing for the Corto. Chic, Art Deco design, with its bold geometric forms and strong, precise lines, was highly fashionable and the Corto fit right in.

Mercury is an ideal alternative given that many of its features are inspired by early column radiators like the Corto. Four years in the making, Mercury was designed in house by our Head of Product Simon Evans. Taking his lead from traditional radiator designs, Simon also worked with Steven Marjieh, a lecturer and consultant in CAD modelling, with particular expertise in automotive surface design and metallurgy. Mercury’s sleek curves and crisp lines are testament to Simon’s approach, placing modern surface engineering know-how and brand new casting techniques at the centre of his design.

Asked why they came to us, our customers said: “We chose Castrads because of its reputation and design options. We also liked the thermostat control.”

Adding Niva One-Pipe Steam TRVs to all of their radiators provides automatic temperature control in each room. The radiator valve is no longer just on or off, but is instead set with a 1-5 point temperature scale. A thermostatic sensor inside the valve shuts off the radiator when the room reaches the desired temperature and opens it again when the room cools.

“As a cherry on top, Castrads was able to paint our units in our chosen Farrow & Ball colours.” Attuned to the history of the property, our customers had a clear concept for their colour scheme which they selected from British supplier Farrow & Ball.

Our cast iron radiators are custom made and finished. In addition to our Signature Collection and Bare Metal finishes, you can choose any colour from the ranges at Farrow & Ball, Benjamin Moore or Little Greene.

If you would like some guidance on sizing, positioning or finishing your cast iron radiators, we offer in-person and virtual consultations across the UK.

Book a consultation
We use cookies on our website to give you the most relevant experience by remembering your preferences and repeat visits. By clicking “Accept All”, you consent to the use of ALL the cookies. However, you may visit "Cookie Settings" to provide a controlled consent.
Cookie SettingsAccept All
Manage consent